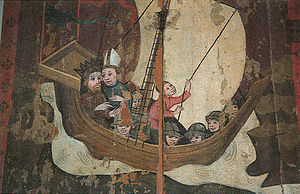 The First Swedish Crusade was a mythical military expedition in the 1150s to Southwest Finland by Swedish King Eric IX and English Bishop Henry of Uppsala.

The crusade has traditionally been seen as the first attempt of the Catholic Church and Sweden to convert pagan Finns to Christianity. However, the Christianisation of the South-western part of Finland is known to have already started in 10th century, and in the 12th century, the area was probably almost entirely Christian.<ref name=":0" /> According to legends, after the crusade Bishop Henry was killed at lake Köyliönjärvi by Lalli. He later became a central figure of the Catholic Church in Finland.<ref>"Eric's crusade to Finland". Archived from the original on 2007-09-27.. Original medieval legend in Latin.</ref>

Academics debate whether this crusade actually took place. No archaeological data gives any support for it and the earliest written sources are from a much later date. No surviving written source describes Swedish influence in Finland before the end of the 13th Century. Furthermore, the diocese and bishop of Finland are not listed among their Swedish counterparts before the 1250s. Also, the Christianisation of the South-western part of Finland is known to have already started in the 10th century, and in the 12th century, the area was probably almost entirely Christian.<ref name=":0">Georg Haggren, Petri Halinen, Mika Lavento, Sami Raninen ja Anna Wessman (2015). Muinaisuutemme jäljet. Gaudeamus. p. 343.{{cite book}}: CS1 maint: multiple names: authors list (link)</ref>

The Swedish bishop normally involved in the eastern campaigns was the Bishop of Linköping, not the Bishop of Uppsala.[citation needed]

The mid-12th century was a very violent time in the northern Baltic sea, with Finnish tribes such as Tavastians and Karelians as well as Swedes in frequent conflicts with Novgorod and with each other.<ref>See articles Swedish-Novgorodian Wars and Prehistoric Finnish wars.</ref> The First Novgorod Chronicle tells that in 1142 a Swedish "prince" and bishop accompanied by a fleet of 60 ships plundered just three Novgorodian merchant vessels somewhere "on the other side of the sea", obviously being after something more important.<ref>"First Novgorod Chronicle entry on the attack in 1142". Archived from the original on 2007-09-27.. In Swedish.</ref>

At the time, leading the leiðangr was the responsibility of the jarl. That gave rise to a theory that Eric conducted the expedition before he became king or pretender to the throne.[citation needed] Legends give no year for the expedition but attempts to date it to an exact year in the 1150s are all much later speculations. All that is known about King Eric and Bishop Henry is that they most probably held important positions in Sweden some time in the mid-12th century.[citation needed]